A subtype of the human papillomavirus (HPV) which is less common in the airway than the more common subtypes 6 and 11. HPV 31 is associated with a higher risk of cancer formation, along with HPV subtypes 16, 18, 45, 55, and others. 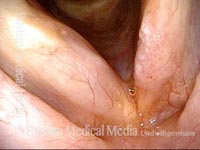 Papillomas: HPV Subtype 31 (1 of 4)
Standard light, showing lesions on the vocal cords, in particular the stippled vascular pattern we call "HPV effect." The patient's voice was nearly gone, with numerous syllable drop-outs and a very effortful quality. Compare with photo 3. 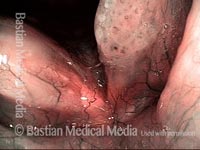 Papillomas: HPV Subtype 31 (2 of 4)
Closer view, using narrow-band light to accentuate the vascular pattern of "HPV effect." Biopsy and additional testing of these lesions showed squamous papilloma with moderate dysplasia, and HPV subtype 31 was confirmed, which is high risk for eventually causing cancer. After the patient underwent several injections of cidofovir, the lesions persisted but seemed to become more indolent. On compassionate grounds, this fairly young person was then prescribed celecoxib for six months. 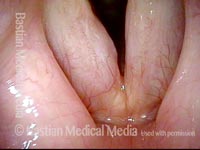 Papillomas, in remission: HPV Subtype 31 (3 of 4)
Three years after photos 1 and 2, standard light view. Within two months of the start of celecoxib, voice improved very noticeably, and the "HPV effect" vascularity resolved. Still, it is unknown what roles in this recovery were played by the patient's immune system, the cidofovir, and the celecoxib, respectively. 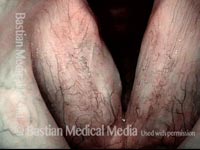 Papillomas, in remission: HPV Subtype 31 (4 of 4)
Closer view than photo 3, under narrow-band light.

HPV 31 as a cause of "chronic laryngitis": Series of 4 photos

Hazy leukoplakia, HPV suspected (1 of 4)
This 20-something nonsmoker without reflux symptoms is chronically hoarse. HPV infection is suspected for the following reason: While hazy leukoplakia can be occasionally seen as a result of excessive voice use, it would be most unusual to this degree, and this far lateral to the vocal cord margin. Biopsy shows only chronic inflammation, and HPV testing is positive for subtype 31.

HPV effect confirmed (4 of 4)
Within the circle, one can see faint HPV-effect on vasculature (stippling).

Carcinoma in situ (1 of 4)
This man developed hoarseness spontaneously a year before this visit. He had accumulated 30 pack-years as a smoker, but had quit 7 years earlier. Removal of “polyps” elsewhere returned a diagnosis of carcinoma in situ (CIS), the earliest stage in the development of cancer.

HPV subtype 31 (2 of 4)
Under narrow band light, note some unusual “suspicious” capillaries, and the stippled “HPV effect” at the arrow. These findings triggered HPV subtyping and identification of high-risk subtype 31.

Excisions (3 of 4)
After 2 prior excisions elsewhere with positive margins, somewhat aggressive excision was performed in the operating room, attempting to avoid the need for radiotherapy in this fairly young man. The specimen showed severe dysplasia/ CIS, but with negative margins. After some months, voice became very functional.

Seven years later (4 of 4)
Seven years later, at an annual visit, there are no stippled or other abnormal vascular marks. Voice has been very acceptable to the patient, if occasionally faintly husky.