A subtype of the human papillomavirus (HPV) which is less common in the airway than the more common subtypes 6 and 11. HPV 45 is associated with a higher risk of cancer formation, along with HPV subtypes 16, 18, 31, 55, and others. 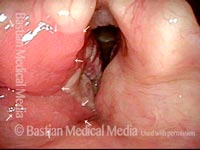 Papillomas: HPV Subtype 45 (1 of 2)
Papillomas in the supraglottis, left of image. The pink, velvety area of papillomas is outlined by small arrows. 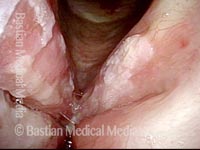 Papillomas: HPV Subtype 45 (2 of 2)
Closer view of the vocal cords, showing leukoplakia. This is presumably a second expression of the HPV infection, though the typical dotted or pointed vascular marks of HPV are not seen in the area of the leukoplakia. 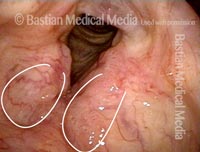 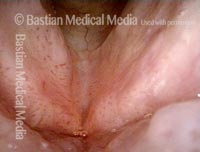 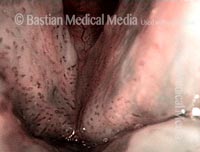 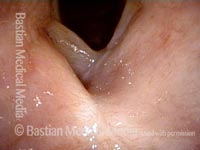 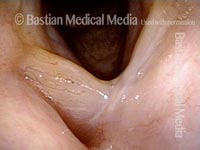 HPV effect no longer seen (7 of 7)
Closer view of final result; patient has very good voice. Note that the HPV-related stippled vascularity is no longer seen.