A subtype of the human papillomavirus (HPV) which, along with subtype 11, is one of the more common subtypes seen in the airway. HPV 6 is associated with a lesser risk of cancer formation, as is HPV 11.

Papillomas, HPV subtype 6, before and after removal: Series of 4 photos 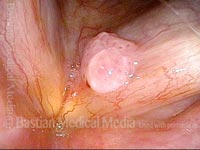 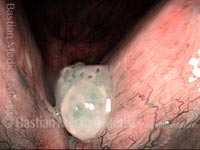 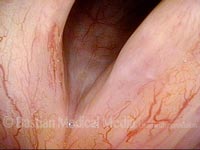 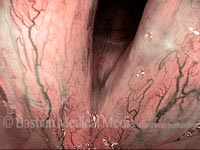 Subtle papillomas, HPV subtype 6 (1 of 3)
After achieving a normal voice through several procedures, the patient came in for reexamination due to the return of mild huskiness. This distant panoramic view with standard illumination does not reveal any obvious papillomas. 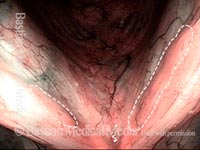 Subtle papillomas, HPV subtype 6 (2 of 3)
At close range, using narrow band illumination, a subtle but definite HPV effect is seen. Notice the stippled vascular markings and the faintly increased pinkness at the margins of the cords, indicated by dotted lines. 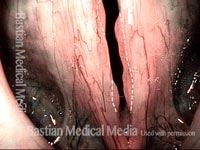 Subtle papillomas, HPV subtype 6 (3 of 3)
With the vocal cords now at the pre-phonatory instant, these low-profile HPV-related papillomas are again seen, indicated by dotted lines.

Two papillomas (1 of 3)
Approximately one month after removal of papillomas and Avastin injection in a man who has battled aggressively-recurring disease caused by HPV, type 6. In this view using narrow band light, only two small papillomas are visible.

Type 6 HPV Papillomas firmer than most: Series of 4 photos

Stippled vascularity not seen (1 of 4)
Diffuse involvement of true and false cords with papilloma caused by HPV 6. After hundreds of procedures from childhood through early adulthood, the stippled vascularity is not extremely evident in this standard-light view.

“Curative mode” plan (1 of 7)
Known HPV 6-induced laryngeal papillomas, with resulting gross hoarseness. The plan is “curative mode” defined as 3 or more successive, surgical cleanouts with adjuvant injection to see if the disease can be put into remission or at the least “tamed” to less rapid recurrence.

Closer view (2 of 7)
At closer range. Still, the full extent of disease becomes more obvious at the anterior right vocal cord (left of photo at arrow) in the next photo, when viewed under narrow band illumination (NBI).

Post surgery (4 of 7)
A few days after surgical removal using the usual “basement membrane peel” technique of removal and in this case cidofovir injection. Voice is already dramatically improved, the right cord (left of photo) retains vibratory ability, and the grey wound base is seen clearly.

Towards “management mode” (5 of 6)
Voice had been “normal” until recent weeks, and so the patient therefore waited longer than intended for followup surgery, to the point that we are drifting out of “curative mode” and over into “management mode.” Here, under standard light, the disease is not that obvious.

Same view under NBI (6 of 7)
Under NBI at closer range, the carpet of HPV upper surface and one actual papilloma are more evident, but it is still not quite clear why the patient says voice has been getting slightly hoarse.

Stippled vascularity seen (7 of 7)
At closer range, faint HPV-induced vascular stippling is seen along the margin of the right vocal cord (left of photo) within the dotted line, and this explains his subtle and increasing hoarseness. Another surgical cleanout with adjuvant medication is scheduled.