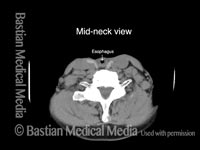 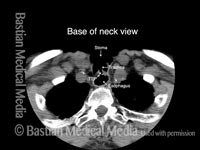 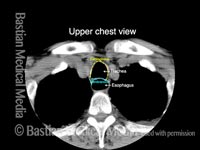 Esophagus, after total laryngectomy (3 of 4)
Below the tracheostome, the entire trachea is again seen. The horseshoe-shaped anterior segment of the trachea’s wall, two-thirds of the total circumference, is the trachea’s cartilaginous component. The posterior one-third is the membranous trachea, which also constitutes the anterior one-third of the esophagus, and is also called the tracheoesophageal party wall. The esophagus is again dilated with air here. 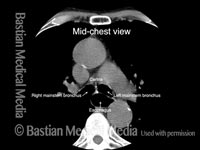 Esophagus, after total laryngectomy (4 of 4)
At the mid-thoracic level, the trachea is splitting into the two mainstem bronchi, and the esophagus is still seen due to dilation with swallowed air.