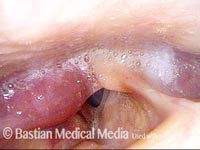 Larynx fracture (1 of 4)
Panoramic view shows bruising and marked swelling of the right arytenoid eminence, as well as the right false vocal cord. 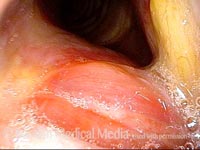 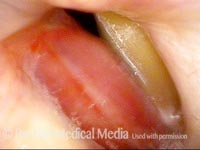 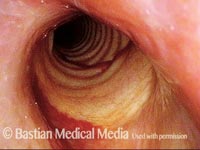 Larynx fracture (4 of 4)
View from within subglottis, and down into the trachea shows bruising.

Breathing position (1 of 4)
Initial BVI examination, many months after an auto accident with laryngeal fracture. Voice is functional but remains abnormal. In breathing position of the vocal cords, note that tip of the vocal processes of the arytenoid cartilages (denoted by larger dots) are not opposite, but the left one (right of photo) is markedly farther anterior.

Mis-match (2 of 4)
As the vocal cords approach adducted voice-making position, one can again see dramatic mis-match of the tips of the vocal processes.

Prephonatory view (3 of 4)
Closer view as the cords approach voice-making position. The dots again indicate the tip of the vocal process, with the right one (left of photo) just out of view.