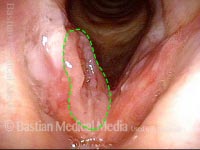 Prior to start of radiation (1 of 4)
Patient with vocal cord carcinoma, primarily of the right true cord (left of picture). This is before radiation therapy began, so there is not yet any radiation mucositis. 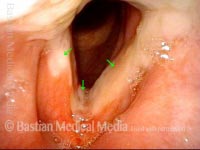 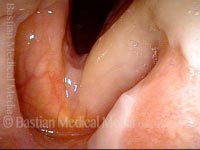 Radiation mucositis, 4 weeks after radiation (3 of 4)
Almost four weeks after the end of radiation therapy. Note that the mucositis has begun resolving, especially on the right cord (left of picture). 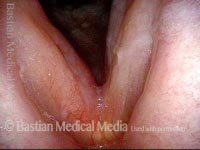