Also called bone spurs, osteophytes are usually seen at joints where inflammation or injury causes new bone cells and calcium to be deposited; in other words, new bone is formed. Osteophytes of the cervical spine occur with the passage of time and, when large, can project anteriorly into the swallowing passage. Only rarely do cervical osteophytes alone interfere with a person’s swallowing or voice capabilities. 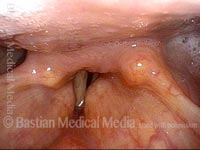 Cervical osteophyte (1 of 1)
Panorama of the hypopharynx and larynx. The posterior pharyngeal wall protrudes forward and seems to contact the posterior surface of the arytenoid cartilages.

Swallowing applesauce (2 of 7)
After the second bolus of blue-stained applesauce. The propulsive ability ("pitcher of swallowing") is inadequate, leaving a lot of post-swallow residue.

After sipping water (3 of 7)
After three sips of blue-stained water, much of the applesauce has been washed away.

Gravity aiding in swallowing (4 of 7)
Additional water washes nearly all of the residue in the "swallowing crescent" away--mostly by gravity as seen in the next photo.

Lifting larynx (5 of 7)
Each swallow looks like this. The pharynx "bird swallow" mechanism lifts larynx forward so that the swallowing crescent opens down to the cricopharyngeus muscle, indicated by double dotted lines. (PC = post-cricoid.)

A closer look (6 of 7)
At closer range, the cricopharyngeus muscle bulge is seen more clearly, along with the small opening into the esophagus.

Gravity aiding again in swallowing (7 of 7)
Blue-stained water flowing into the esophagus mostly by gravity.