This behavioral treatment is prescribed primarily for patients with nonorganic voice disorders. A patient with a nonorganic voice disorder has been diagnosed with aberrant voice production due to the abnormal use of a normal mechanism, often due to stress or some sort of secondary gain. She or he may have been ‘stuck’ with the abnormal voice for months to years, or may lurch between normal and abnormal voice production on an apparently involuntary basis. To help patients first “find” their normal voices, the clinician guides the patient through a variety of vocal elicitations such as: a yell, glissando, siren, or vocal fry. All of this may be with or without clinician digital manipulation of the laryngeal framework. After preliminarily ‘settling in’ the patient’s reestablished normal voice, the clinician quickly asks the patient to alternate between the re-established normal voice and the old abnormal voice. First, the patient alternates upon clinician cue, again optionally with or without digital manipulation, and then the patient demonstrates the ability to switch between the two kinds of voice production at the sentence level, and then every few words, and then word-by-word. The positive and negative practice demonstrates mastery / control over the abnormal/ nonorganic voice production. If possible, this process should occur with patient, clinician, and family/ friends in attendance. Other doctors, speech pathologists, pulmonologists, and allergists who may have previously attempted to help the patient using medical rather than behavioral treatments should also be made aware of the nature of the patient’s diagnosis, the purely behavioral approach to it, and the idea that behavioral intervention to resolve this problem completely should not normally exceed three visits to a speech pathologist, to avoid his or her becoming a co-dependent or source of secondary gain.

Listen to a few demonstrations below:

Mucosal chatter is an audible phenomenon of injured vocal cord vibration. It is commonly heard in the softly-sung upper voice of persons with nodules, polyps, etc.

Hoarseness or roughness are broad and nonspecific descriptors useful only for severe injuries. Small injuries that are nevertheless impairing the singing range may leave the speaking voice sounding normal. I suppose “hoarseness of singing range” could be used, but again, that would be an unsophisticated and basic description of vocal phenomenology. To hear more useful phenomena of injury, we elicit and thereby investigate the upper range of singing (even in nonsingers) because high, soft singing makes the phenomenology apparent.  This is why we have described “vocal cord swelling checks” and created a video to teach how to elicit them, and also how to evaluate and communicate the phenomenology that results. In particular, delays of phonatory onset (“onset delays”) above approximately C5 (523 Hz) may indicate mucosal injury even when speaking voice sounds normal. Also heard is air-wasting, where there is a “scratchiness” to the excess airflow. Segmental vibration is also a common audible phenomenon of a mucosal disorder can also be easily taught and recognized.

Vocal cord mucosal chatter adds an extremely rapid “shudder” on top of the pitch of the voice. I have used “chatter” rather than “shudder” because the latter suggests a lower frequency than the former. It could be called a very fine-grained diplophonia…but typical diplophonia, caused by independent vibrating segments, is a much grosser vocal phenomenon. While chatter is more subtle, once it is pointed out and taught briefly, most people can easily distinguish between onset delays, diplophonia, segmental vibration, the transient “squeaking” of a micro-segmental vibration,  the crackling sound of mucus dancing on the vocal cords, and “chatter.”  Those who master recognition of these phenomena can easily communicate them to colleagues. For our purposes, let me stress again that the above phenomena—and chatter in particular—do not happen in the normal larynx, where vocal cord margins match perfectly and the mucosa oscillates normally.  When heard—even in the person with a normal speaking voice—the examiner can strongly suspect a mucosal abnormality even before examining the vocal cords.  In fact, where these phenomena are heard and initial examination looks normal, it would be a good idea to “look harder.” 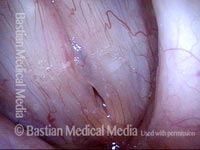 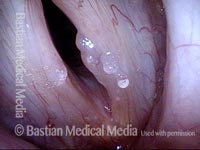 Open phase, E3 (2 of 4)
Open phase of vibration at the same pitch showing that the full length of both cords swings laterally. Now the large polyp left vocal cord (right of photo) is easily seen. 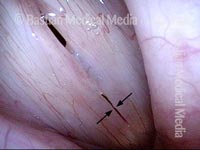 Closed phase, E4 (3 of 4)
At E4 (330 Hz), vibration is damped (not allowed) except for the short anterior segment indicated by arrows. 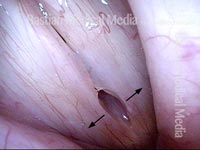 Open phase, E4 (4 of 4)
At the same pitch, but open phase of vibration of that same short segment.

Closed phase (1 of 4)
Closed phase of vibration at C4 (~ 262Hz) in a woman who is chronically hoarse and is a "vocal overdoer". Note the early contact at the bilateral swellings (right greater than left), and the MTD posturing (separation of vocal process "grey" zone posteriorly).

Open phase (2 of 4)
Open phase of vibration, shows that the entire length of the vocal cord margin participates in vibration at this pitch.

Whistle register (4 of 4)
Open phase of that tiny anterior segment. This imparts a truly tiny "tin whistle" quality that cannot be maximized to a volume above beyond pianississimo. In some cases, singers who have not seen their vocal cords at this kind of high magnification under strobe light believe this to be a normal "whistle register".

Search not only for nodules, but also for segmental vibration and look at the posterior commissure for MTD: Series of 4 photos

Open phase (1 of 4)
In a young pop-style singer, the open phase of vibration under strobe light at C#5 (554 Hz). This magnified view is best to see the large fusiform nodules.

Closed phase (2 of 4)
Closed phase of vibration at the same pitch shows touch closure—that is, that the nodules barely come into contact.

Segmental vibration (3 of 4)
Even when patients are grossly impaired in the upper voice as is the case here, the clinician always requests an attempt to produce voice above G5 (784 Hz), in order to detect segmental vibration. Here, the pitch suddenly breaks to a tiny, crystal-clear D6 (1175 Hz) Only the anterior segment (arrows) vibrates.

Posterior commissure (4 of 4)
A more panoramic view that intentionally includes the posterior commissure to show that the vocal processes, covered by the more ‘grey’ mucosa (arrows), do not come into contact. This failure to close posteriorly is a primary visual finding of muscular tension dysphonia posturing abnormality.

Glottic sulci (1 of 4)
Closed phase of vibration, strobe light, at G3 (196 Hz) in a young high school teacher/ coach who is also extremely extroverted. Faint dotted lines guide the eye to see the lateral lip of her glottic sulci.

Segmental vibration (4 of 4)
Open phase of vibration also at E-flat 5, Only the tiny segment opens significantly. As expected the patient’s voice has the typical segmental “tin whistle” quality. 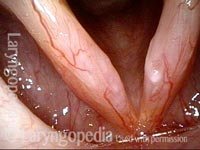 Margin swelling (1 of 6)
Breathing position of the vocal cords of a very hoarse actor. Note the margin swelling of both sides. The white material on the left vocal cord (right of photo) is keratin debris emerging from an open cyst. Find the sulcus of the right vocal cord (left of photo) which is more easily seen in the next photo.

Open phase, strobe light (3 of 6)
Under strobe light, open phase of vibration at A3 (220 Hz). The full length of the cords participate in vibration.

Closed phase, same pitch (4 of 6)
At the same pitch, the closed phase again includes the full length of the cords.

Segmental vibration (5 of 6)
At the much higher pitch of C5 (523 Hz) a “tin whistle” quality is heard and only the anterior segment (at arrows) is opening for vibration. The posterior opening is static and not oscillating, as seen in the next photo.

Prephonatory instant (1 of 6)
This young woman has been hoarse for many years. This preparatory posture shows marked separation of the cords posteriorly, suggesting MTD as well.

Phonation (2 of 6)
Now producing voice, with vibratory blur of the entire length of the cords on both sides.

Gaps due to nodules (3 of 6)
Under strobe light at a lower pitch of A4 (440 Hz), closed phase of vibration. Large gaps anterior and posterior to the polypoid nodule(s) explain breathy quality and short phonation time.

Open phase (4 of 6)
Open phase of vibration also at A4 (440 Hz) shows that the full length of the vocal cords are vibrating. Compare with the following two photos.

"Tin whistle" sound (5 of 6)
Now at A5 (880 Hz), the patient can only make an extremely tiny (tin whistle) quality. The only segment vibrating is within the circle (here, closed phase). The posterior segment does not vibrate.

This characteristic might manifest most clearly during sustained phonation as a glitch, catch, wavering, tremor, in-and-out vocal fry, or other such finding. In each case, the patient would be unable, partially able, or only intermittently able to produce a steady and predictable voice.

Voice-affecting dystonic tremor might sometimes be mistaken for the tremor induced by a different neurological disorder, essential voice tremor. If one knows what to listen for, however, it is usually possible to distinguish dystonic tremor from the tremor induced by essential voice tremor. Most obviously, dystonic tremor is almost always accompanied by other manifestations of dystonia, such as phonatory arrests, dropouts to a whisper, or squeezedowns. Dystonic tremor may worsen under specific circumstances—with stress, fatigue, or during telephone use, for example. Dystonic tremor is often (though not always) more pronounced in the patient’s chest register voice than falsetto register voice—sometimes dramatically so—and this difference might be heard when the patient is asked to sustain a single sung note as steadily as possible. Finally, dystonic tremor’s amplitude can vary from cycle to cycle; to use singers’ parlance, it is as though a couple of cycles of “wild” vibrato are followed by a few cycles of merely wide vibrato, followed by a second or two of much more stable voice. In the occasional case, however, a patient’s tremor is so overwhelming and these distinctive qualities of dystonic tremor so subtle that the clinician proceeds initially with a working, rather than settled, diagnosis.

Vocal tremor: A regular, wavering quality of voice, analogous to a singer’s vibrato but occurring, to an individual’s distress, during speaking, not just during singing. May occur as a sole abnormality in essential voice tremor, or in combination with spasmodic dysphonia.

The name given to a quality of sound produced at low pitch (generally below 70 Hz, or around E2 or F2 in musical notation). Vocal fry is produced in what some call pulse register, as compared with chest and falsetto registers. Once defined with the help of audible examples, most individuals can readily identify this quality of voice. It may be heard in poorly produced voices; in other cases, it is used intentionally as a training technique, particularly for air-wasting dysphonia that has a functional cause.

In the voice, a pulsating effect produced by small variations of pitch, typically occurring five or six times per second. The opposite of singing with vibrato is to sing with straight tone.

A vocal phenomenology term coined to refer to adductory spasms that do not “complete” all the way to a phonatory arrest. Virtually exclusively a manifestation of spasmodic dysphonia.