A subtype of subglottic stenosis that is inflammatory.  One view is that this entity is actually a limited expression of Wegener’s Granulomatosis (aka Granulomatosis with polyangiitis).

Post dilation (1 of 4)
Six months after dilation of idiopathic (inflammatory) subglottic stenosis, the patient has noted only slight deterioration, and breathing ability remains acceptable to her.

"Sharing" the airway (4 of 4)
Here, the scope has been passed through the area of maximal narrowing and the patient becomes acutely aware of greater difficulty breathing. "Sharing the airway" is a way of 'measuring' it functionally. Note again the congested capillaries.

Another way to inject idiopathic subglottic stenosis: Series of 3 photos 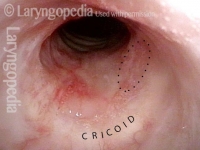 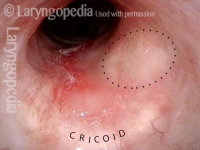 Priot to injection (2 of 3)
A needle has been passed through anterior neck skin and its tip rests out of sight, submucosally just inferior to the anterior cricoid ring. Note that the milky white medication has been infused submucosally within the dotted ring. 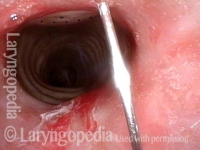 Injection (3 of 3)
Here, the 27-gauge needle traverses the trachea in order to inject the posterior tracheal wall. The submucosal white medication appears at the *.