Subglottic stenosis, before treatment (1 of 2)

Subglottic stenosis, after treatment (2 of 2)

Subglottic stenosis, before and after dilation: Series of 2 photos

Subglottic stenosis, before dilation (1 of 2)
This individual has undergone at least a dozen prior dilations, each of which provides dramatic relief from noisy breathing and exercise intolerance. Here the patient is halfway to needing re-dilation, due to the typical inflammatory stenosis that is seen. Compare with photo 2.

Subglottic stenosis, after dilation (2 of 2)
One week after one of this patient's dilations (with Kenalog injection and topical Mitomycin C), showing a dramatic widening of her airway; compare with photo 1. After a number of years, inflammatory lesions such as this sometimes "burn out," and the interval between dilations increases. 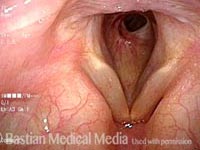 Subglottic / Tracheal stenosis (1 of 4)
Inflammatory subglottic/tracheal stenosis, thought to be the result of an incomplete expression of Wegener's granulomatosis (no history of trauma). 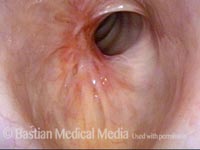 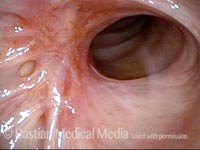 Subglottic / Tracheal stenosis (4 of 4)
Close view, showing the inflammatory nature of the stenosis. 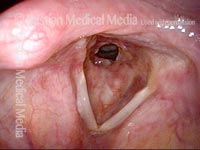 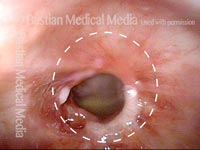 Subglottic stenosis, before and after dilation: Series of 5 photos 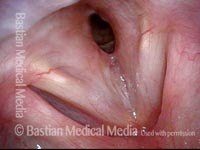 Subglottic stenosis (1 of 5)
Middle-aged woman with unexplained shortness of breath and noisy breathing, due to this idiopathic inflammatory and very high subglottic stenosis. The patient initially declined dilation due to her anxiety. She also had granularity of the nasal septum and a positive ANCA profile for Wegener’s granulomatosis. 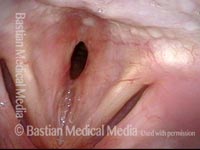 Subglottic stenosis, worsened (2 of 5)
Five months later, the symptoms became intolerable, and the stenosis was noted to be slightly narrower and with a greater posterior component. The patient agreed to dilation.

Subglottic stenosis, worsened (3 of 5)
Same exam as photo 2; this close-up view shows more clearly the inflammatory nature of this stenosis. 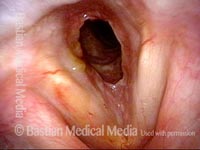 Subglottic stenosis, after dilation (4 of 5)
Five days after outpatient dilation, triamcinolone injection, and topical mitomycin C application. The patient’s symptoms have vanished, the harsh inspiratory noise is no longer heard, and the size of the airway, though still not normal, is more than doubled. Compare with photo 2 of this series. 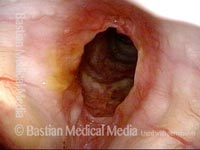 Subglottic stenosis, after dilation (5 of 5)
Same exam as photo 4, close-up view. Intensification of the inflammatory changes of this stenosis are expected so early after dilation. Compare size of the stenosis with photo 3 of this series.

Stenosis before and after dilation for forme fruste Wegener's: Series of 5 photos

Inflammation (2 of 5)
Closer visualization reveals the inflammatory nature of the stenosis.

Flexible scope (3 of 5)
Here the distal chip flexible scope has passed through the narrowing not only to see into distal trachea, but also as a breathing test. The patient becomes very aware of reduced space and this indicates a marginal airway.

Post-dilation (4 of 5)
A week after dilation, triamcinolone injection and mitomycin C application, the patient says breathing is now normal, and forced inspiration time is only a second in duration--normal. Compare with photo 1.

Narrowed space for breathing (1of 4)
This man was gravely ill and intubated for several weeks. He is now well, but tracheotomy-dependent. The vocal cords do not abduct fully due to scarring of the cricoarytenoid joints. However, the narrowed space for breathing between the posterior vocal cords is not the main reason he is tracheotomy-dependent, as seen in the next photos.

Closer view (3 of 4)
A closer view, again through the vocal cords.

Difficulty breathing after a 3-day intubation: Series of 5 photos

Noisy, restricted breathing following intubation (1 of 5)
This teenager was intubated for 3 days due to tongue swelling. Breathing became noisy and restricted approximately 6 weeks later. Note that the vocal cords do not abduct fully and there is what appears to be granulation tissue at the posterior commissure (anterior asterisk).

Normal voice (2 of 5)
The vocal cords can come into contact as shown here, consistent with her normal-sounding voice.

At close range (3 of 5)
At very close range within the posterior commissure, a small tract is seen posterior to the "granulation" which is now seen more clearly to be a broad-based synechiae with asterisks marking anterior and posterior limits.

At even closer range (4 of 5)
An even closer view verifies a posterior tract, and this makes it less likely that the cricoarytenoid joints are also injured.

Mucosa-only scar (5 of 5)
This view is taken with the scope passed just between the vocal cords and just anterior to the synechiae and angled directly posteriorly. A small superficial-looking "mucosa-only" scar is seen bilaterally, surrounded by dotted line. It can be confidently predicted that when the synechiae is released, the arytenoid cartilages will likely be able abduct fully.