The leaking of saliva outside of the pharynx (“throat” part of the swallowing passage) through a defect in the pharyngeal mucosa lining. This may occur transiently in up to 20% of persons who have undergone total laryngectomy, with the sixth postoperative day the peak time of incidence. Prior radiation therapy seems to increase the risk of fistulization.

Traditionally, the treatment was to make a midline incision directly, insert a penrose drain, and then use pressure dressings. Modern treatment uses suction drains to control salivary leakage and allow the rest of the skin flap to adhere to the neck1. Then, the drain is removed, shortened, and replaced a series of times to allow the tract to close from top to bottom. 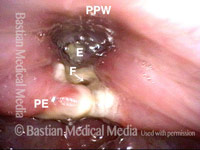 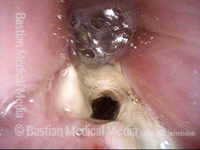 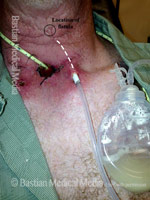 Larynx losing function (1 of 4)
This man underwent supraglottic laryngectomy and radiotherapy nearly 20 years ago. A biopsy was done some years later elsewhere, and triggered radionecrosis. Hyperbaric oxygen treatments back then saved the day. This larynx has continued to lose function slowly over time, necessitating tracheotomy, and with deteriorating voice quality. The latest problem is coughing on liquids, and they are coming out his tracheotomy tube. Here, you see the arytenoid apices (each marked with A). Epiglottis and false vocal cords are surgically absent. Base of tongue (BoT) was pulled down to the level of the vocal cords. Click to enlarge this photo to see the dots marking the upper surface of each cord.

Swallowing (2 of 4)
Now looking deep into the surgically-minimized laryngeal vestibule, the two larger dots are again on the vocal cords, for comparison with photo 1. The fine dotted line encircles a fistula. When the patient swallows, food or liquid can enter in the direction of the arrow. Where it goes next is seen in the following photos.

Swallowing water (4 of 4)
Remaining in the anterior subglottis while the patient swallows pale blue-stained water, you see a part of the bolus “exploding” through the fistula, and this series of 4 photos taken together fully explain why this man is having so much difficulty with liquids that he swallows coming out his tracheotomy tube.