Go straight to total laryngectomy, or give thulium laser a chance?: Series of 3 photos

Lesion (1of 3)
Nearly 80-year old man in whom CT for another reason shows this lesion just below the vocal cords, left upper trachea. Comparison with CT 18 months earlier shows the same lesion, and it is now only a few mm larger than then. Note that this man has had partial pharyngectomy and postoperative radiotherapy 40 years earlier for a pharyngeal wall cancer.

Decisions (2 of 3)
A week after attempted removal with the laser in the O.R. Removal was only partial due to difficult anatomy. The pathology result was "papilloma, with focus of invasive squamous cancer." Radiotherapy is not an option. Tracheal distortion is from tracheotomy 40 years before. 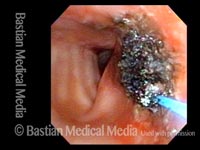 Removal (3 of 3)
The dilemma: Do a total laryngectomy with no cartilage destruction, the papilloma component, and such minimal progression over 18 months? Thus, the decision to do this aggressive laser ablation in the videoendoscopy procedure room. Surveillance will be intense, and total laryngectomy may still be necessary. More, later...

How a sphincter works: Series of 2 photos

Open (1 of 2)
After total laryngectomy, the upper esophageal sphincter is open here for a brief moment, allowing one to see beyond into the esophagus.

Contracted (2 of 2)
A moment later, the sphincter contracts, as though the purse string of a velvet jewelry bag had been tightened.