The need for a tracheoesophageal voice prosthesis:

A patient who undergoes a total laryngectomy procedure will have the entire larynx removed and the end of the trachea redirected to an opening—called a stoma—created in the front of the neck. The result is that the patient can now breathe through this stoma, but would be unable to make any voice, because the larynx (voice box) is gone, and the air for voicing that once passed up through the larynx, causing the vocal cords to vibrate and thereby making voice, now simply exits the trachea at the stoma. Such a patient can obtain an alternate voice by using a TEP device.

The placement of a tracheoesophageal voice prosthesis:

In order to place a TEP device into the wall that separates the trachea and esophagus (the tracheoesophageal party wall), a puncture must first be made, into which the device can fit. This puncture can be made during the laryngectomy procedure (primary tracheoesophageal puncture) or else afterward in a separate procedure (secondary tracheoesophageal puncture), typically some weeks after the laryngectomy. Some clinicians prefer to place the device itself as part of the primary puncture. Others first place a catheter to hold the puncture open and allow for tube feedings while the pharynx heals, and then they place the actual device in an office setting 10 days or more later.

The use of a tracheoesophageal voice prosthesis:

When a patient with a TEP device wants to speak, he or she must momentarily cover the stoma in the front of the neck, so that air coming up from the lungs is redirected through the TEP and into the esophagus to make voice. Some patients will simply cover the stoma as needed with their thumb, if their stoma is normally left entirely open, or is only concealed from view with a small, unobtrusive, breathable cloth. More commonly, however, the patient’s stoma is fitted with a housing, into which is placed a heat and moisture exchanger (HME); in these cases, the HME, which looks like a flat, plastic button, can be pushed as needed to block the stoma and enable voicing. Whatever the case, speaking with a TEP device is a learned skill and requires training through speech therapy. 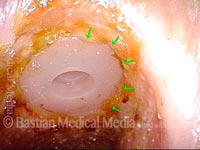 Tracheoesophageal voice prosthesis (1 of 4)
Tracheal flange beginning to embed (at arrows) because the TEP device is too short. 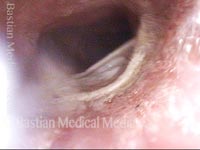 Tracheoesophageal voice prosthesis (2 of 4)
Esophageal flange is bowing outward because the TEP device is too short. 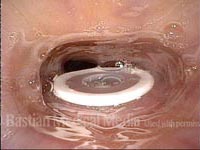 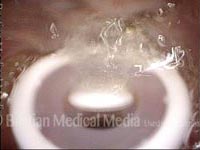 Tracheoesophageal voice prosthesis, during voicing (4 of 4)
During TEP voicing, pulmonary air comes up the trachea, is diverted through the center of the TEP device and, when the one-way valve opens, comes into the esophagus to bring its walls into vibration. 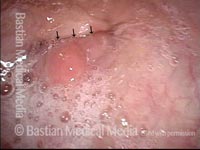 Hypopharynx of a tracheoesophageal voice prosthesis patient (1 of 4)
Panoramic view of the hypopharynx, in a patient who has undergone total laryngectomy. The entrance to the esophagus is at the line of arrows. 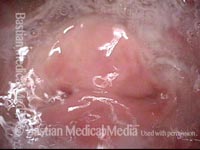 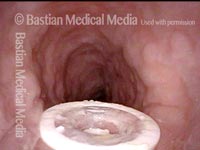 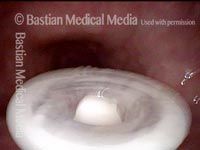 Tracheoesophageal voice prosthesis, as the patient makes voice (4 of 4)
The patient has capped his tracheostome and is diverting air into the esophagus through the now-open central flutter valve. The pharyngoesophageal tissues are now vibrating (as seen in photo 2), and this vibration is blurring the image.

TEP's that want to become buried: Series of 4 photos 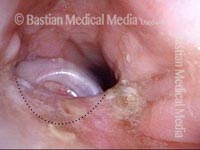 TEP buried (1 of 4)
This man’s TEP voice is becoming gradually more effortful, choppy, and strained. The explanation is that tissue (mucosa) is slowly burying the inner (esophageal) flange of the device. Half of the circumference is hidden under the mucosal flap indicated by dotted line. 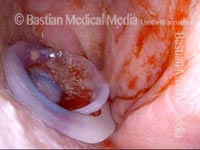 Re-inserted and re-positioned TEP (2 of 4)
After re-inserting and re-positioning, now the entire circumference is visible, and voice has returned to effortless baseline. 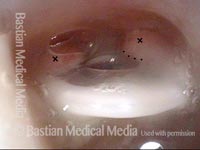 Tissue overgrowing flange (3 of 4)
In a different patient, tissue (at X’s) is also trying to overgrow the internal (esophageal) flange.

How the one-way flapper valve works in a tracheo-esophageal voice prosthesis: Series of 3 photos 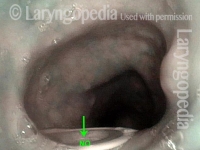 Food and liquid blocked from trachea (1 of 3)
This view is just inside the upper esophagus in a man who has undergone laryngectomy. The white-edged “disc” at the bottom of the photo is the inner flange of the TEP device. The arrow points towards the valve just inside the flange. This valve says “no” to any food or liquid that wants to pass in the direction of the arrow and into the trachea (not seen here). 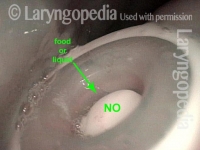 Closer look at closed valve (2 of 3)
Here, we see the flapper valve more clearly. Again in its “closed” position, it will not let food or liquid enter. 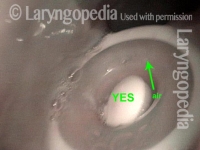 Opened valve (3 of 3)
Now we see the flapper valve lifted out of its housing. The patient is placing his thumb over the tracheostome (not seen here) and diverting air through the TEP device and into the esophagus. The esophageal walls are brought into vibration to produce continuous, pulmonary air-powered esophageal voice.