Refers to both the process of removing a bit of tissue from a person so that it can be studied and “diagnosed” by the pathologist, and also to the piece of tissue itself. “The surgeon biopsied (verb) the vocal cord and then sent the biopsy (noun) to the pathologist for examination under the microscope.” 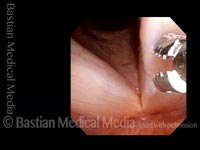 Biopsy (1 of 2)
2-millimeter forceps being used to scrape the area of leukoplakia to retrieve cells for HPV testing. In this case, it was negative. 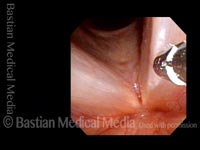 Biopsy (2 of 2)
Cup forceps closed. Note that there is no biopsy, per se, but just scraping of the surface of the cords. 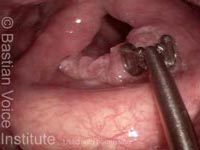