Gastroesophageal reflux disease (GERD) is a syndrome caused by structural or functional incompetence of the lower esophageal sphincter, such that it permits retrograde flow of acidic gastric juice into the esophagus, and up to the level of the larynx and pharynx (throat). GERD is made more likely by obesity, large, late meals before bed, alcohol, and acidic, salty, or spicy foods. Treatment can include dietary modification, placing the frame of the bed on a head-to-toe slant, and a variety of medications that decrease stomach acidity. 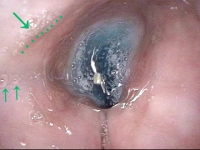 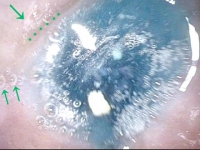 Acid Reflux int he lower esophagus (2 of 2)
A moment later, without effort or gag, the blue water refluxes (zooms upwards from the lower esophagus and stomach) towards the stationary camera chip. If this occurred with acidic stomach contents, the esophagus would suffer chemical irritation and the patient might experience “heartburn.”