A “Motivated” laryngeal examination is an examination in which the clinician “pushes” the larynx to reveal its secrets. If topical anesthesia is used, this can be done without undue discomfort to the patient, and laryngeal images can be close and clear rather than far and fuzzy. 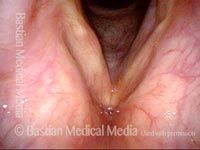 Motivated examination (1 of 4)
Typical view for laryngeal videoendoscopy or videostroboscopy. A few years earlier, this patient underwent superficial laser cordectomy of the right vocal cord (left of photo) for cancer. The voice result is excellent, and the patient is being seen this day for a routine interval examination, and has no new complaints. 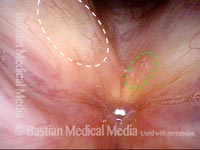 Motivated examination (2 of 4)
At closer range, two findings become evident. First, permanent capillary reorientation is seen (inside the white dotted oval), which is typical after superficial cordectomy; note the more jagged and left-right capillary patterns. Second, tiny points of leukoplakia (inside the green dotted oval) become evident on the opposite vocal cord. The bright white spot in the photo is just a light reflection. 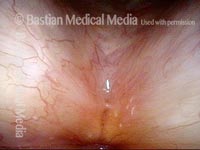 Motivated examination (3 of 4)
After vigorous throat clearing, and using a view that is closer still, capillary and leukoplakia findings are confirmed. Note that the brilliant white light reflection is now in a different location. 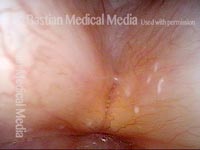 Chronic hoarseness, nodules suspected (1 of 2)
A person with chronic hoarseness. Working from a “typical” laryngeal examination photo alone, one might suspect vocal nodules.

Arrows point to papillomas (2 of 2)
By going to the trouble of getting an extremely close-range view such as this one, requiring use of topical anesthesia, one can see what appear to be papillomas, with stippled vascular effect associated with HPV-related disease. RRP is in fact the biopsy-proven diagnosis and papillomas are indicated by arrows.