Verrucous carcinoma is a variant of squamous cell carcinoma (SCCA). In the head and neck, this uncommon subtype of SCCA is seen most often in the oral cavity or on the vocal cords. Visually, it tends to have an exophytic (outward-growing) and wartlike, irregular surface. This variant of SCCA is typically less aggressive than other squamous cell carcinomas. Local recurrence tends to be the issue more than distant metastasis. Surgery tends to be the most effective treatment, though of course every patient’s circumstance is individualized and considered in the light of three treatment options: surgery, radiation therapy, and chemotherapy.

Verrucous carcinoma, before and after laser treatment: Series of 5 photos 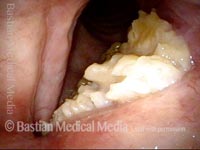 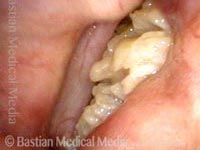 Verrucous carcinoma (2 of 5)
During voicing. 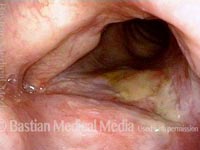 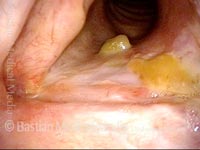 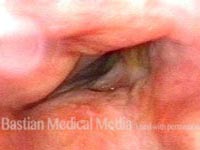 Verrucous carcinoma, several weeks after laser treatment (5 of 5)
During voicing. Arytenoid moves, but much of membranous vocal cord has been ablated as intended.