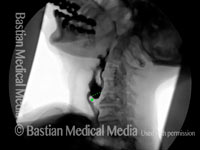 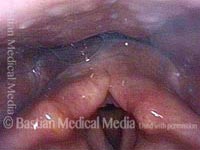 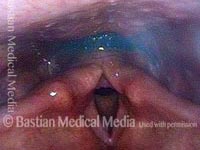 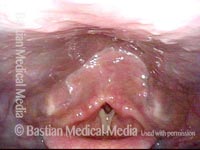 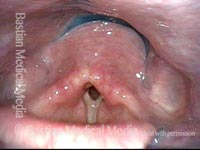 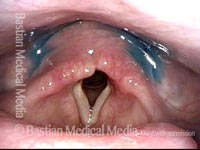 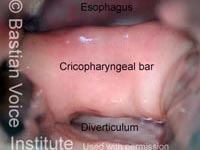 Immediately after swallow (1 of 4)
During VESS, after administration of several boluses of blue-stained applesauce. Trace applesauce on pharyngeal walls, immediately after a completed swallow. The postcricoid area is “clean” in this view, at *.

One second later (2 of 4)
Approximately a half second later, applesauce appears at the *, having been ejected upwards from a presumed Zenker’s diverticulum.

More water (4 of 4)
After several more boluses of blue-stained water, the applesauce has mostly washed away, and the same findings of photo 3 are seen more clearly.

Zenker's diverticulum returns its contents upwards to the throat after each swallow: Series of 3 photos 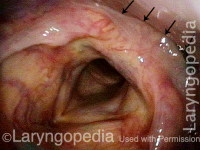 (1 of 3)
During Videoendoscopic swallow study (VESS), this patient has just swallowed blue applesauce. It has disappeared downwards (arrows) into the upper esophagus but part of it is retained in a Zenker's diverticulum (out of view). 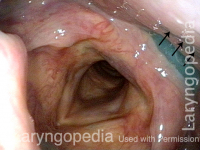 (2 of 3)
Exactly one second later blue applesauce appears in the swallowing crescent as the sac empties a part of its contents upwards. 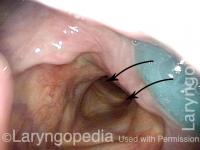 (3 of 3)
One second later, even more blue applesauce has emerged. If it were more liquid, it would spill forward to enter the airway. This explains the constant throat clearing and re-swallowing of persons with Zenker's diverticula (caused by antegrade cricopharyngeus dysfunction).