Aspiration can occur before, during, or after the act of swallowing. Aspiration before the swallow means that liquid or food in the mouth dribbles or spills down into the larynx and beyond before the swallow is initiated.  This is seen most commonly when there is a neurological disorder, such as after a cerebrovascular accident (stroke).

Aspiration during swallowing happens when, as the swallowed material travels from the base of the tongue toward the entrance to the esophagus (in the pharyngeal phase of swallowing), some of that material drops into the larynx and straight down through it to enter the airway. This kind of aspiration can happen because a person’s vocal cords don’t close properly, due to paralysis, paresis, or tissue loss such as after a partial laryngectomy. 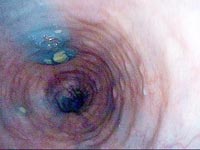 Aspiration (1 of 1)
After patient swallows blue-stained applesauce, some enters the trachea. Vigorous coughing can clear this away so that even chronic aspiration of this sort does not necessarily cause pneumonia. 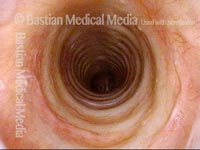 Trachea, normal view (1 of 2)
Looking down the trachea. 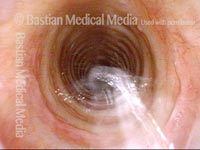 Trachea, aspiration (2 of 2)
The patient aspirates a drip of saliva. If this were a larger amount of food material, and if it frequently descended much lower, to the level of the air sacs, this person would develop pneumonia. 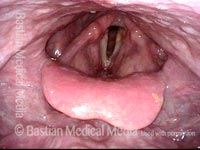 Aspiration (1 of 7)
Panoramic laryngopharynx view. The patient is holding a sip of liquid in his mouth and preparing to swallow it. 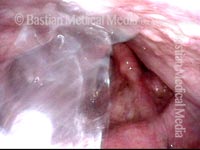 Aspiration (2 of 7)
Before he initiates the swallow, a small drip of liquid "escapes" and drips downward into the pharynx. The patient does not yet suspect this. There are only a few drops of liquid, even though it looks like a larger amount due to the close-up view. 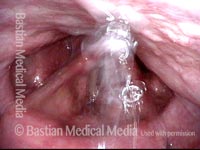 Aspiration (3 of 7)
A few milliseconds later yet, the tiny drip has fallen halfway down the length of the pharynx. One can see that the patient is not aware of this drip, as he has not fully closed the vocal cords. 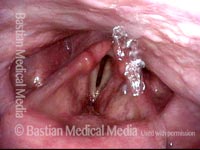 Aspiration (4 of 7)
A few milliseconds later, the drop is arriving at the left (right of image) pyriform sinus. The patient is still not aware of this swallowing "mistake". The vocal cords remain open, so if this liquid had dripped instead into the laryngeal opening, it would have entered the airway and made him cough. 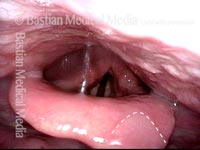 Aspiration (5 of 7)
With a second sip of faintly blue-stained water, a small trickle escapes "early" before the swallow. One can see the leading edge of water flowing onto the epiglottis (indicated by the dotted line). 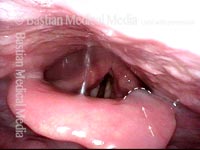 Aspiration (6 of 7)
The leading edge of the water has advanced and continues to flow downwards. This is indicated by the dotted line and arrows. 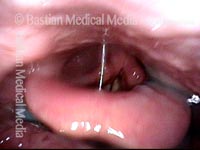 Aspiration (7 of 7)
The leading edge of the water has again advanced and continues to flow downwards into the laryngeal vestibule and through the open vocal cords. This time, the patient coughs.

All It Takes Is A Drip to Make You Cough: Series of 4 photos 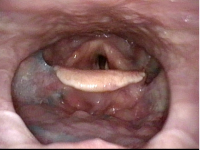 Coughing (1 of 4)
This patient is annoyed by occasional coughing when she sips liquids. She has had no pneumonias, weight loss, or increased time required to eat/drink. Here, the patient has just taken a sip of blue water and holds it in her mouth. 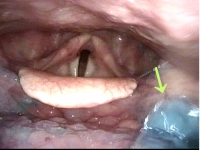 Coughing (2 of 4)
Just before swallowing, a tiny drip of blue water “gets away” and begins to trickle down into her throat. Vocal cords remain unsuspectingly open. 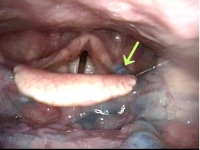 Coughing (3 of 4)
The drip (arrow) has now reached the left aryepiglottic fold, which is the “side of the boat” that keeps liquid out of the airway. The drip looks smaller than in photo 2 because it is farther away. She does not cough. 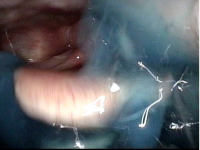 Coughing (4 of 4)
During a different swallow, if a much larger amount of water were to drip prematurely down into her throat, a part of it would enter the laryngeal entrance and provoke coughing. If coughed back up, there would be little risk of pneumonia.