Intubation injury (1 of 4)
After a 9-day intubation for serious illness, the patient has difficulty breathing due to this “proud flesh” response to injury within the cricoid ring, posteriorly. Breathing has improved in the past week, leading to a decision to await further maturation, rather than proceeding to microlaryngoscopic removal.

Lobules (2 of 4)
Close-up view of the lobules of granulation tissue. Air can easily pass around the obstruction as indicated by the arrows.

2 months later (3 of 4)
As predicted, breathing continued to improve to the point of seeming normal to the patient, and 2 months later, the granulation tissue has matured and detached, leaving behind a subglottic scar band (parallel lines).

Scar band (4 of 4)
Here is a close-up of the scar band. A solid line denotes the anterior border of the scar band for reference in all 4 photos, but compare especially to photo 2.

Sometimes you DO remove granulation to avoid tracheotomy: Series of 8 photos

Granulation (1 of 8)
Prior to this first visit, this person suffered extensive burns, was intubated for 10 days, and then underwent tracheotomy, and then was decannulated (tracheotomy removed). She has scarring of the posterior commissure outlined by the dotted line. The granulation extends well down into the subglottis. She is uncomfortable with a marginal airway and noisy breathing. Laser and microdebrider are planned to try to avoid having to reinsert the tracheotomy.

Closer view (2 of 8)
Tip of the iceberg view of granulation and scarred area.

Scarring (4 of 8)
At close range, the area of posterior scarring is again indicated by dotted line; the dark area of the actual airway is narrow and slit-like.

Closer view (7 of 8)
A closer view of the airway, which is much wider posteriorly than preoperatively (photo 4). 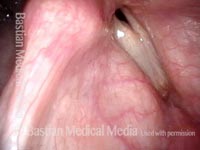 Phonatory view (8 of 8)
When patient makes voice, there is a persistent space posteriorly, where the airway was surgically widened, but again, this has not significantly affected the voice.