A breathing disorder, often mistaken for asthma, in which a person induces his or her trachea to narrow, causing wheezing or apparent shortness of breath. The person’s oxygen saturation remains normal, but his or her description of the problem and apparent breathing distress may be quite dramatic; in severe instances, the person may have been intubated and placed in intensive care, based purely upon the “drama”—that is, the person’s distressed appearance and audible noises. The extent of medical intervention prompted by this pseudo-asthma can be remarkable.

The person’s trachea momentarily narrows or collapses, but unlike with tracheomalacia, this narrowing or collapse is not due to any anatomical or physiological disorder of the person’s trachea. Instead, it can be seen as an added capability of the trachea: an unusual, heightened capability of the membranous tracheal wall to flex inward and decrease the caliber of the “pipe.” A person whose trachea has this added capability may figure out how, with inconspicuous excessive expiratory effort—a sort of semi-Valsalva maneuver that isn’t evident to observers—to induce this tracheal or tracheobronchial collapse that creates the wheezing heard by family, friends, or co-workers.

Often, this upper airway wheezing ability can be just a personal quirk (like double-jointedness) that has no particular significance to the person’s life; think of a “wheezy laugh.” Such a case would not be a nonorganic breathing disorder case. In extreme cases, however, a person may begin to use this wheezing ability to masquerade (perhaps sub-consciously) as having asthma, in order to achieve some kind of “secondary gain”; this added element puts a case into the category of a nonorganic breathing disorder. Sometimes, the person does have asthma, but is able to markedly amplify the asthma’s apparent severity by overlaying on it this dramatic nonorganic upper airway wheezing ability.

How it is diagnosed:

If a clinician listens to this person’s breathing with a stethoscope placed over the lung fields, the wheezing can indeed sound exactly like asthma. However, there are some key diagnostic criteria that help the discerning clinician to recognize a case of nonorganic breathing: 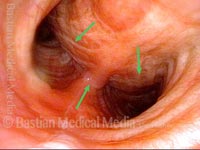 Nonorganic breathing disorder, tracheal (1 of 2)
Distal trachea, showing the carina (middle arrow), where the trachea (or windpipe) divides into the two mainstem bronchi. The membranous tracheal wall is flexible, and beginning to bulge forward functionally (under patient control). 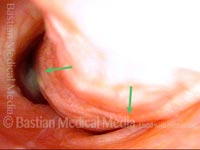 Nonorganic breathing disorder, tracheal (2 of 2)
On expiration, there is anterior bulging (arrows) of the tracheoesophageal party wall, to the point of largely obstructing the mainstem bronchi. Air moving through this functionally narrowed space can cause wheezing on a non-organic basis. Wheezing will be much louder with auscultation over the manubrium, than on listening in the peripheral lung fields. 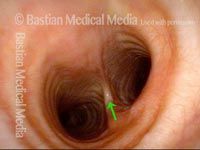 Nonorganic breathing disorder, tracheal (1 of 2)
View of the distal trachea in a patient with nonorganic “asthma.” An arrow marks the location of the carina; note how, at this moment, the mainstem bronchi to each side are widely opened. 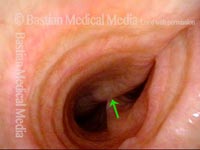 Nonorganic breathing disorder, tracheal (2 of 2)
Wheezing. (Arrow still at the carina.) One can see that the cause of the wheezing is functional manipulation of the distal trachea, in this case mainly the left mainstem bronchus (right of image); hence, the wheezing is louder over the lung on that side than the other side. Also, unlike with true asthma, the wheezing is much louder over the manubrium than either of the peripheral lung fields. 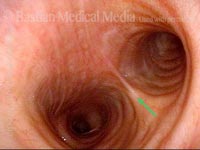 Nonorganic breathing disorder, tracheal (1 of 2)
View of the distal trachea at the carina (where the windpipe divides into the right and left mainstem bronchi). Orienting arrow at the base of the carina. 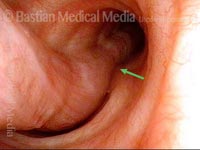 Nonorganic breathing disorder, tracheal (2 of 2)
With exhalation, the tracheoesophageal party wall bulges inward to largely obstruct the right mainstem bronchus. The result is convincing, but nonorganic, wheezing. This is suspected from the patient's affect (e.g., surprising nonchalance and distractibility) and because the wheezes auscultate more loudly over the central chest than in the periphery. (In this slightly closer view, an arrow again indicates the base of the carina.)

View of trachea during inspiration (1 of 6)
This man has expiratory wheezing but the question of vocal cord dysfunction (which usually causes inspiratory noise) has been raised. The actual problem is not laryngeal, but instead functional/ non-organic large airway wheezing. Here is a view of most of trachea during inspiration. “M” designates membranous portion in all photos of this series.

Exhaling forcibly (2 of 6)
When asked to exhale forcibly, marked wheezing is heard. The membranous trachea invaginates but does not appreciably narrow the lumen caliber. Wheezing is NOT from this level of the trachea.

Carina (3 of 6)
Deeper in, with carina in clear view during inspiration (marked with “C” in this and subsequent photos).

Wheezing origin (6 of 6)
The membranous right mainstem bronchus bulges inward and leaves only a small dark crescent of space for out-rushing air. THIS is where the wheezing is originating. Wheezing noises from distal trachea and mainstem bronchi will be transmitted to the lungfields better and more closely mimic asthma, as compared with wheezing that originates in the trachea; which is much louder on auscultation at the sternal notch than in the peripheral lungfields.