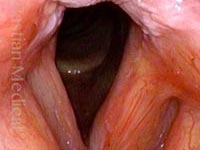 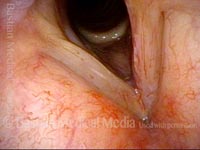 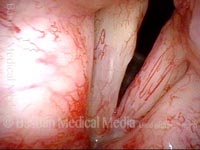 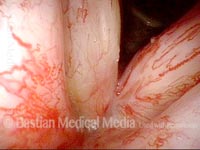 Atypical dilation or formation of capillaries (typically seen in the laryngopharynx) as a mid- or long-term response to radiation. These are a benign but sometimes impressive-looking tissue change. Often, post-radiation telangiectasia does not appear until a year or more following the end of the course of radiation.

Radiation: telangiectasia increases slowly but is maximal by 3 years after end of radiation: Series of 8 photos

Inflammation with moderate dysplasia (1 of 8)
Hoarseness began 2 years prior to this initial examination photo. This middle aged man has never smoked; has no reflux symptoms, nor has he had any response to empiric reflux therapy. Biopsy shows inflammation with moderate dysplasia. HPV testing was negative. No explanation for this chronic inflammation is ever found. A series of KTP laser treatments of stippled vascular areas and leukoplakia ensues.

Post radiation (3 of 8)
Six weeks after the end of his 30 radiation treatments, healing of the superficial ulceration (within dotted lines) is underway. 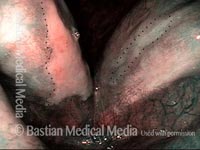 Narrow band light (4 of 8)
Closer view, now under narrow band light: A fine vascular pattern has returned except in the areas bounded by dotted lines.

Standard light (7 of 8)
Now 3 years from the end of radiotherapy, radiation telangiectasia are “maximal” and stable. Voice remains very good.

Telangiectasias and more after radiotherapy: Series of 2 photos

Post radiotherapy (1 of 2)
More than five years after radiotherapy for early vocal cord cancer, the post-radiation telangiectasias seen here are maximal and not expected to increase further. What can occasionally increase, are small polyp-like elevations (arrow to the left).