The anatomical region that begins roughly at the base (back) of the tongue and goes down to the level of the upper part of the trachea/esophagus low in the neck. The laryngopharynx comprises an area in which both breathing and swallowing functions are shared. When one reaches the larynx/esophagus, at that point begin separate and dedicated passages for air and food. 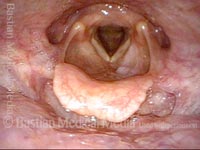 Laryngopharynx (1 of 1)
Panoramic view of the laryngopharynx, showing the base of the tongue, the vallecula, epiglottis, vocal cords in abducted (breathing) position, and posterior pyriform/ postarytenoid “crescent,” which serves as the superiormost entrance to the foodway (cervical esophagus).