The rupture of one or more capillaries in the vocal cords, so that blood leaks into the tissue. This vocal cord bruising occurs as a result of excessively vigorous mucosal oscillation, usually during extensive or vigorous voice use, aggressive coughing, or even a very loud sneeze, and it can make the voice hoarse or otherwise limited.

If the ruptured capillary is extremely superficial, like the capillaries seen on the white of the eye, then a “thin suffusion” kind of bruise occurs, and there is no deformity of the vocal cord margin; within a few days, the voice recovers. If the vessel is a few cell layers deeper into the cord, then a small “puddle” of blood like a micro-hematoma may collect and create a kind of “blood blister.” Although a superficial bruise resolves quickly and doesn’t seem to cause permanent damage, the “blood blister” type can become a hemorrhagic polyp and require surgery; with state-of-the-art surgery, however, the voice can virtually always be restored to its original capabilities.

Vocal cord bruise / hemorrhage, before and after rest and surgery : Series of 4 photos 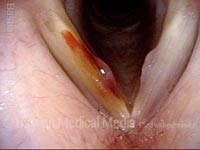 Vocal cord bruise / hemorrhage (1 of 4)
Bruise, right vocal cord (left of image), estimated one week old, in combination with large polypoid vocal nodules. Note the yellowish discoloration, indicating partial breakdown of the hemoglobin (source of red color of blood) into hemosiderin as bruise is beginning to be cleared away. 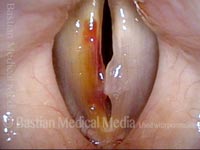 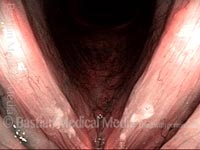 Vocal cord bruise / hemorrhage, after rest and surgery (3 of 4)
Bruise was allowed to resolve, and then patient underwent vocal cord microsurgery one week prior to this examination. 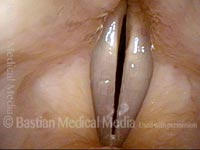 Vocal cord bruise / hemorrhage, after rest and surgery (4 of 4)
Same patient, during phonation. Note the patient’s tendency to phonate with a gap between the cords, as though the vocal cords “remember” the early contact that used to require separation during voicing. This gap can be lessened through expert speech (voice) therapy. 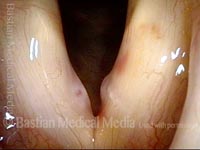 Vocal cord bruise / hemorrhage (1 of 2)
Bruise, left vocal cord (right of image), estimated three weeks old, in combination with vocal nodules, capillary ectasia. There is likely an ectatic capillary also on the same side, within the nodule, that is the source of the leaking of blood into the tissues. When the bruise first occurred, it would have been most evident in the area of the nodule. As time passes, the central part of the bruise typically resolves first, with the last area to disappear anterior and posterior, as shown here. Note also the faint yellowish discoloration of the left cord, indicating residual hemosiderin (breakdown products of blood in tissue). 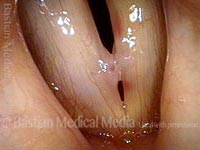 Vocal cord bruise / hemorrhage, before and after rest: Series of 6 photos 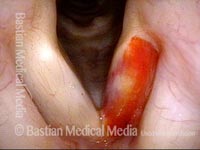 Vocal cord bruise / hemorrhage (1 of 6)
Breathing position, standard light. Notice a superficial bruise of the left cord (right of image), still very bright red. The source vessel cannot be identified with certainty here, but would be expected to be in the mid-cord, where the bruising is least evident. This is because mucosal oscillation tends to "massage" the bruise anteriorly and posteriorly, when the bruise is a thin-suffusion "wet pavement" type rather than a pocket or "puddle" of blood. 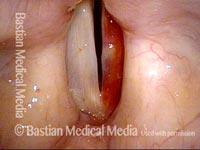 Vocal cord bruise / hemorrhage (2 of 6)
Prephonatory instant, standard light, shows that the margin of the left cord (right of image) is relatively straight. This suggests that the bruising is a very thin layer, and not a pocket of blood (as mentioned in photo 1). 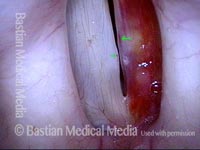 Vocal cord bruise / hemorrhage (3 of 6)
Closer phonatory view, strobe light, also shows subtle elevation of the right cord (left of image), and a tiny ectatic capillary (small arrow), both of which can suggest that this person has been using the voice a lot. Left cord shows a darker linear bruise (larger arrow). After the bruising clears, perhaps it will become evident that this is in fact the ectatic capillary. 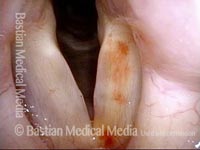 Vocal cord bruise / hemorrhage: after 2 weeks of rest (4 of 6)
After two weeks of relative voice rest, standard light. Notice the yellowish discoloration, which represents the breakdown products of hemoglobin. No obvious culprit capillary is seen. The last blood to resorb is always at the periphery from the point of origin. 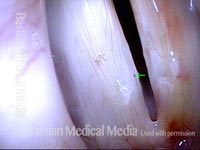 Vocal cord bruise / hemorrhage: after 2 weeks of rest (5 of 6)
Strobe light, open phase of vibration. No obvious ectatic vessel is seen, except for the vessel on the non-bruised side (at arrow) that was seen in photo 3. 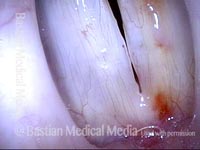 Vocal cord bruise / hemorrhage: after 2 weeks of rest (6 of 6)
Strobe light, closed phase, shows small margin swellings, greater on the left cord (right of image) than on the right cord. This swelling is being addressed by ongoing mild voice conservation, “on the fly” – i.e., while the person carries on with her work.

Bruise caused by violent coughing (1 of 2)
A person with violent sensory neuropathic coughing may injure the vocal cords, as illustrated by this bruise, right vocal cord (left of photo).

Bruising from SNC (1 of 1)
This individual occasionally coughs to the point of hoarseness. Particularly noteworthy is the subglottic bruise (arrow, dotted line) caused by profound Valsalva-retching kind of coughing. The rest of the right cord (left of photo) is also bruised.

Bruise from coughing (1 of 3)
This man had an episode of aggressive coughing a week earlier. Note the bruising over the vocal processes, which receive the major collisional force during coughing.

Pre-phonatory instant (2 of 3)
The vocal processes are approaching the point of touching (contact would occur gently with onset of talking and more aggressively with coughing).

The evolution of vocal cord bruising and emergence of a vulnerable capillary: Series of 2 photos

Margin swelling and bruising (1 of 2)
This professional woman is extraordinarily dynamic and intense, and must talk all day to do her work. Here, the right vocal cord (left of photo) is bruised due to vibratory trauma. The margin swelling on the right causes her hoarseness more than the bruising, however. 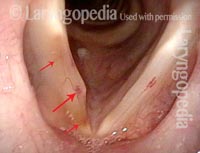 Six weeks later (2 of 2)
Six weeks later, the bruise is mostly resolved. The capillary that “leaked” blood to form the bruise is now seen more clearly (long arrow). This ectatic capillary can be seen easily now when looking back at photo 1. The short arrows indicate the residual “smudges” of discoloration caused by breakdown products of the bruise. The last evidence of widespread vocal cord bruising is always in these two locations.

Nodules and Other Vocal Cord Injuries: How They Occur and Can Be Treated
This video explains how nodules and other vocal cord injuries occur: by excessive vibration of the vocal cords, which happens with vocal overuse. Having laid that foundational understanding, the video goes on to explore the roles of treatment options like voice therapy and vocal cord microsurgery.