The backward flow (reflux) of acid from stomach up into the esophagus or, even further up, to the level of the laryngopharynx. Symptoms may be esophageal, laryngopharyngeal, or both. Esophageal symptoms include heartburn, indigestion, and acid belching. Laryngopharynx symptoms tend to include dry throat, husky (especially morning) voice, frequent morning throat clearing, excessive mucus, and mildly sore throat. 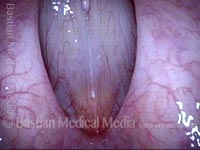 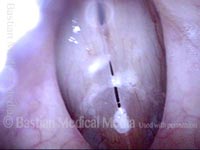 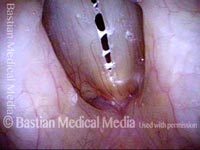 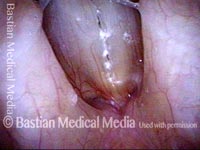 Prominent capillaries and mucus (2 of 4)
Here we see loss of color differential between true and false cords. Capillaries are prominent (like bloodshot eyes) on the true cords. There is also adherent mucus.