The posterior one-third of the vocal cord’s visible length and also, during breathing, the space between this segment of both cords. This posterior third of the cord, or cartilaginous glottis, is inhabited by the arytenoid cartilage and covered by a relatively thin layer of perichondrium and, on top of that, a layer of mucosa.

It is on the cartilaginous glottis that contact granulomas occur, on the cord’s medial surface. The other two-thirds of each vocal cord’s visible length is called the membranous glottis. 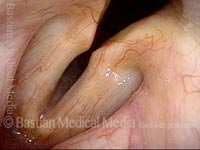 Cartilaginous glottis (1 of 1)
Vocal cords approaching adducted (phonatory) position. Note that the posterior 1/3 of the vocal cord is “inhabited” by the arytenoid cartilage, with vocal process turned slightly medially. The cartilaginous glottis appears to make up more than the posterior 1/3 of the cord due to optical distortion from the wide-angle lens used in the tip of the endoscope.