A subtype of the human papillomavirus (HPV) which is less common in the airway than the more common subtypes 6 and 11. HPV 16 is associated with a higher risk of cancer formation, along with HPV subtypes 18, 31, 45, 55, and others. 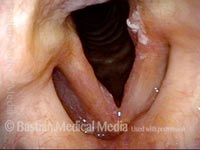 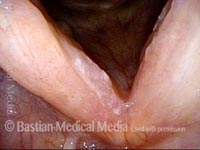 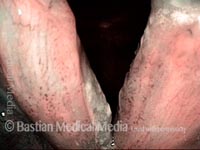 Lesions of HPV Subtype 16 (3 of 3)
A similar view to image two, but with narrow-band illumination, which accentuates the vascular pattern. Biopsy/removal of these lesions revealed high-grade dysplasia; re-biopsy almost a year after this examination returned a diagnosis of cancer.

Cancer, HPV Subtype 16, before and after radiation: Series of 5 photos 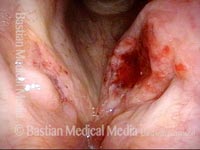 Cancer: HPV Subtype 16 (1 of 5)
Cancer, in a patient with HPV subtype 16. The divot and blood seen on the left vocal cord (right of image) are the result of a biopsy performed elsewhere (not by BVI physician) earlier the same day as this examination. 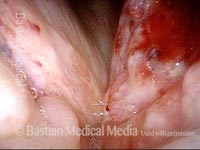 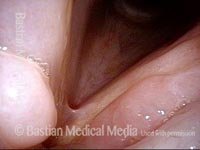 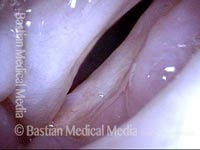 Cancer: HPV Subtype 16, after radiation therapy (4 of 5)
Phonation. Strobe light, open phase of vibration, shows that the margin of the left cord (right of image) is at a lower level than the right’s, due to loss of some of the bulk of the cord where the tumor died and sloughed away. 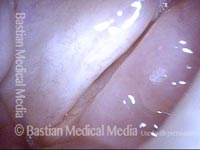