The pharynx (loosely “throat”) has a “foodway” function to convey food and liquid from the mouth to the esophagus. It also serves as part of the “airway,” also from mouth into the larynx and trachea. These foodway/airway functions are kept separate so food and liquid do not enter the airway towards the lungs. At the moment of swallowing, vocal cords clamp firmly together and epiglottis drops over the entrance of the larynx to divert food and liquid into the esophagus. During each swallow, lasting perhaps a second, breathing is briefly suspended. Once the food/liquid has gone by, the larynx re-opens and breathing resumes.

A thin sheet of muscle surrounds the pharynx, and squeezes to narrow the pharynx and help to propel swallowed material. That contraction lasts for approximately one second, each time the person swallows. The muscle is innervated bilaterally by the pharyngeal branch of the vagus nerve and so one side or both sides can be paralyzed by tumor, fracture at the base of the skull, viral injury, etc.

This diagnosis is often overlooked, because clinicians may not be clear on how to make the diagnosis. The best way is to obtain a clear panoramic view of the laryngopharynx as seen in the photo series below, and ask the patient to produce a very high pitch. This maneuver “recruits” contraction of the pharynx outside of the act of swallowing and allows the examiner to see clearly the difference in the contraction of the two sides. The paralyzed side is pulled to the non-paralyzed side, again as seen below.

Some with unilateral pharynx paralysis can compensate and continue to swallow (with limitations). Others are completely unable to surmount the impediment of this kind of paralysis. 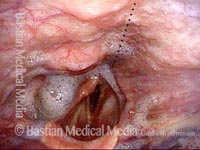 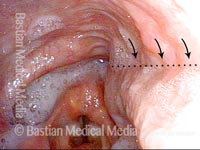 Pharyngeal paralysis, more obvious with pharynx contraction (2 of 2)
The pharynx is contracted, and the posterior pharyngeal wall (midline again at dotted line) now deviates dramatically toward the non-paralyzed side of the pharynx. This pharynx contraction was elicited via extremely high-pitched voicing. 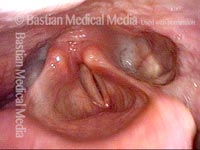 Pharyngeal paralysis (1 of 1)
Panorama of the laryngopharynx. Note the capacious left pyriform sinus (right of photo), one strong indicator of paralysis of the pharynx on that side. 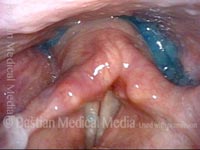 Pharyngeal paralysis (1 of 1)
Blue-stained water swallowed by the patient has preferentially pooled in the left pyriform sinus (right of image), due to weakness of the left inferior pharyngeal constrictors.