A neurological disorder in which the nerve supply to both vocal cords is absent. This may be as the result of injury through external trauma, thyroid surgery, or blunt or penetrating trauma to the neck. Sometimes vocal cord immobility due to scarring—from an endotracheal tube, for instance—is mistaken for vocal cord paralysis, though the distinction is usually easy to determine, provided that an appropriately intense and directed workup is done. In particular, this workup must include topical anesthesia to the larynx so as to enable an extremely close visualization of the posterior commissure and subglottis, which may uncover evidence of scarring. 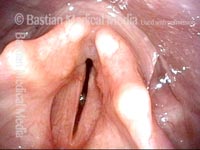 Maximum space between cords (1 of 2)
After thyroidectomy many years earlier, the patient’s exercise tolerance became minimal without becoming short of breath and making loud inspiratory vocal sounds. Eventually, she underwent tracheotomy, which she has continued to wear for more than ten years. This view shows the maximum space between her vocal cords, which paradoxically occurs when she exhales. 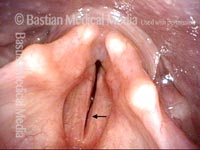 View during inhalation (2 of 2)
When asked to inhale with tracheotomy tube momentarily plugged, the passing air causes the vocal cords to indraw slightly and come into vibration, creating “involuntary inspiratory phonation.” Note the faint convexity and grey blur where the mucosa is vibrating.

Paralyzed vocal cord (1 of 2)
Paralyzed right vocal cord, with bowing and atrophy. Here, the left vocal cord is maximally but incompletely abducted. Subtle markings are for reference with photo 2.

Indrawing with inspiration (2 of 2)
With elicited inspiration, the mucosa of the undersurface of both vocal cords indraws due to Bernouilli effect/ micro-vortices and further narrows the airway. At the same time, the patient involuntarily makes inspiratory voice.