How an epidermoid cyst forms:

Epithelium is the tissue that makes up the outermost layer of skin, and is also the top layer of tissue that lines the interior of the body. Epithelial tissue produces a protein called keratin. If any of this epithelial tissue somehow becomes buried in the subepithelial layer, then the keratin it produces may become trapped and accumulate within the subepithelial layer, leading to an epidermoid cyst.

In the vocal cords, an epidermoid cyst may sometimes occur simply due to a congenital defect: keratin-producing epithelial cells were buried in the subepithelial layer from birth. Some believe this is the explanation even when the initial manifestation of hoarseness doesn’t occur until adulthood. In these cases, however, it is more logical to see vocal overuse as the key factor, perhaps because epithelial cells can get buried in the subepithelial layer as the vocal cord mucosa heals in response to a vocal overuse injury.

Vocal symptoms of an epidermoid cyst:

An epidermoid cyst may cause vocal limitations similar to that of vocal nodules. However, patients with epidermoid cysts are more likely to experience diplophonia in the upper voice, and as the voice ascends in pitch, its impairment may manifest itself much more abruptly and severely at a particular frequency, as compared to most patients with nodules, who experience a more gradual transition to increasing impairment as they ascend in pitch.

Appearance of an epidermoid cyst:

An epidermoid cyst of the vocal cord is generally most visible on the cord’s upper surface, and is whitish in color. In comparison with mucus retention cysts, epidermoid cysts project less from the cord, and when smaller, they can be quite subtle and easy to miss. Sometimes an epidermoid cyst will have spontaneously ruptured but still retain some of the accumulated keratin (an open cyst); in this case, the cyst’s outline may be more subtle, and usually assumes an oval shape with the long axis oriented anteriorly and posteriorly. An open cyst may also produce a mottled appearance.

Treatment for an epidermoid cyst:

Speech therapy is important for patients who are vocal overdoers, to help prevent the future occurrence of this or other vocal overuse-related lesions and injuries, but it will not resolve the cyst. Surgery can be performed to remove the cyst. This requires an incision and then dissection of the entire intact sphere of the cyst. The surgery is technically far more difficult than is removal of nodules or polyps, and is more likely to cause chronic stiffness of the disturbed mucosa. Still, results can be very good, especially if the overlying mucosa is relatively thick.

Epidermoid cyst, before and after removal: Series of 3 photos 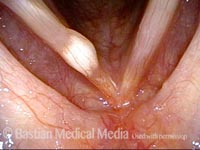 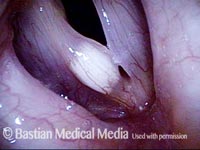 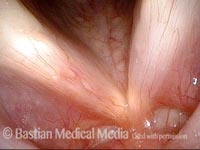 Epidermoid cyst, removed (3 of 3)
After submucosal dissection and removal of cyst. Free margin swelling remains, as one cannot straighten the free margin (remove redundant mucosa stretched over the cyst) at the same time as cyst removal. 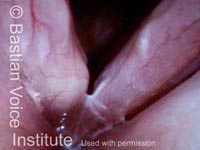 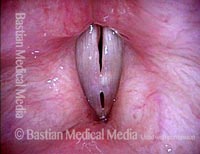 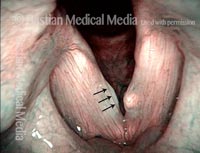 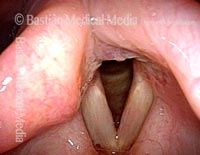 Six days post-surgery, voice improved (3 of 4)
Six days after vocal cord microsurgery to address both lesions seen in photo 2, voice is already dramatically improved. This is a distant view under standard light. 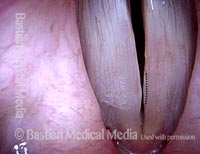 Expected early postsurgical swelling (4 of 4)
Also six days postop, at close range under strobe light. As the cords approach phonation position, note the expected very early postsurgical swelling of the right cord (left of photo), and linear incision (tiny dots) through which the cyst was removed from the left cord (right of photo). No later postoperative photos are available. 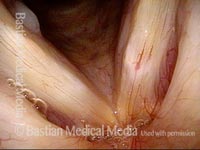 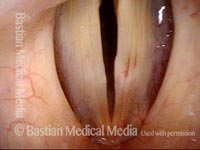 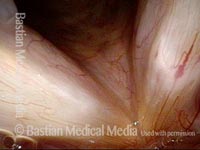 Open cyst (3 of 3)
Closer view. While an intact epidermoid cyst has a distinct outline, an open cyst develops a more mottled appearance. It may leak intermittently from a tiny dimple or sulcus which is sometimes seen at very close range.

Open cyst and sulcus in same patient: Series of 4 photos

Hoarse voice (1 of 4)
A young woman with a history of repeated loud cheering during athletic activities, to the point of hoarseness. She has a sulcus of the right cord (left of photo), and an open cyst of the left (right of photo). Openings from sulcus and cyst are indicated by dotted lines.

Cyst + sulcus (2 of 4)
Narrow band light. The lateral lip of a sulcus is often bordered by a prominent capillary as seen here. An open cyst assumes an elliptical shape in the anteroposterior direction. It fails to empty completely because the opening draining it is smaller than the diameter of the cyst.

Epidermoid cyst, before and after removal: Series of 4 photos

Epidermoid cyst (1 of 4)
A large and somewhat bi-lobed epidermoid cyst of the right vocal cord (left of photo). The cyst is white due to retained keratin. A mucus retention cyst tends instead to be either clear, or yellowish.

Phonatory view (2 of 4)
While making voice, the affected side does not vibrate.

Post microsurgery (3 of 4)
A week after microsurgical removal. The mucosa has been preserved, but capillaries are congested. The incision line on the upper surface of the cord is indicated by the subtle dotted line. Voice is already much improved.

4 months post surgery (4 of 4)
4 months after surgery, expected inflammatory change remains evident, but the incision line is no longer seen. The small white dot at the margin is mucus. Under strobe light, the right cord (left of photo) has regained partial ability to vibrate. Because its match with the left fold (right of photo) is precise, voice is surprisingly good, even at high pitch.

Distant view (1 of 6)
This middle-aged coach has been grossly hoarse for many months. In this distant view, you can see a white submucosal mass of her left vocal cord (right of photo). It already appears to be an epidermoid cyst.

Open phase (4 of 6)
Open phase of vibration at the same pitch. Both cords open and the larynx creates just one pitch.

An octave above (5 of 6)
At an octave above, B-flat 4 (466 Hz), the left vocal cord (right of photo) no longer vibrates. The open phase of vibration includes only the anterior segment here.

"Shimmying" vocal cord (6 of 6)
The open phase a few frames later includes only the posterior segment. Clear sound is produced with this "shimmying" right vocal cord (left of photo) vibration. At other pitches the cord vibrates chaotically with two pitches.